Why PRISM, and programs like it, really don’t matter

The government obviously has had this data for quite some time, and no one I know of has been grabbed by the secret police, nor could they use the data to stop the Boston marathon bombing before it took place.

Government organizations are simply incapable of making use of the data they have access to. I have no doubt of that. I am much more fearful of this breadth of data in the hands of an enterprising individual with a specific, focused agenda. Bureaucracy by sheer existence will ensure this data will remain impotent in the government’s hands.

We should focus on real threats, not imagined ones, like what our government did to a person like Aaron Swartz. After this PRISM leak, is the Everyman going to care more about “this risk to my personal freedom and privacy” (which never existed in the first place–what a farce), or what our government actually DOES do to destroy a citizen’s life, like Aaron’s?

Smart money on the fact that people care less about what happened to Aaron than what they THINK might happen to them (but it never will), simply because they are not Aaron. And, that is the tragedy here…

Today is Election 2010, a boring mid-term election. The air, or at least the US-centric area of the Internet, is buzzing with a borderline Jingoistic fervor with all the “Get out and vote” and “I voted” rubbish. 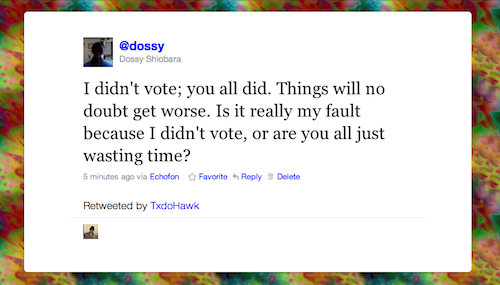 Have you ever tried to find out how much these elections cost us? I’m not talking about campaign funds and all that nonsense which apparently reaches into the billions of dollars, but the actual stuff that is, I assume, paid for using tax dollars: staffing polling locations, the cost of vote-capturing equipment, developing and certifying said equipment, processing absentee ballots, and whatever other overheads there are that I’m not even thinking of. Can you find a source for these cost figures?

I found this article that suggests that a special election that was held in West Virginia cost roughly $20 per vote. In the absence of actual costs, let’s assume that this 2010 general election will cost us taxpayers $20 per vote, too. Looking at 2006’s general election turnout rates, it appears that approximately 83.8 million people voted. That’s potentially $1.6 billion dollars in cost. Quick, name me three worthy causes that you think could really benefit from a boost of $1.6B towards their operating budget.

I know, people vote because “that’s how democracy works” and “if you don’t vote, don’t complain” and all that other noise. Lets face it: has there ever been an election outcome that can be clearly connected in a causal manner to a political improvement? I don’t mean “the person I wanted to win, won,” but a real, tangible benefit on a macroscopic level for the country as a whole. From where I sit, over time, the “goodness/badness” scale bounces around seemingly randomly despite whoever happens to be the elected officials at the time, and if you zoom out a few levels, it mostly looks like a flat line hovering around the midpoint.

It’s more plausible that elections don’t actually have a measurable impact, other than to pacify people with poor deductive reasoning skills who enjoy spending other people’s money.

Think I’m totally off the mark? Just entertain me with a very simple thought experiment: instead of spending over a billion dollars to record votes of millions of people, instead one single person is equipped with a true and fair coin and merely flips it deciding who the winner and who the loser in a particular race is. In the event of multiple candidates in a race, the process is repeated pairing candidates in a single elimination fashion until a winner is selected.

From a distance, can you really tell whether the outcome was based on the votes of millions of people, or by pure random chance? Better yet, do you seriously think it makes a difference? You sure can’t tell by looking at the state of America, I’ll tell you that much.

Do you seriously want to bring about change? Don’t waste our tax dollars by voting. Encourage everyone you know to do the same. Eventually, we can eliminate the entire voting facade entirely and simply rotate politicians in and out of office at random. I guarantee that the outcome will be indistinguishable from what we have today, and we’ll have saved billions of dollars in the process.

Just remember, by the 2012 election, I will become eligible to be the next President of the United States …

time for some new computers

Okay, every year or two, I build brand new machines for Sam … END_OF_DOCUMENT_TOKEN_TO_BE_REPLACED

Apparently, we're to expect a visit from my mother-in-law in … END_OF_DOCUMENT_TOKEN_TO_BE_REPLACED

OK, so after fixing lots of bugs and implementing more … END_OF_DOCUMENT_TOKEN_TO_BE_REPLACED

I take that back, Wolfram Alpha is made of win!

Every month, it pains me to see how much I pay to various … END_OF_DOCUMENT_TOKEN_TO_BE_REPLACED