So, I’m down in Northern Virginia this week for the AOL Open Services Developer Conference Summer 2006, open to AOL Technologies employees, to see and hear about all kinds of stuff that is happening and to talk about where we’re headed in the next few months. The day started out with Sree Kotay starting it off followed by Jon Miller reaffirming that we’re seriously in a transformational phase of AOL’s existance.

The conference is themed around the Lord of the Rings trilogy (natch, as it’s a Time Warner asset). Here, you can see my swank conference badge: 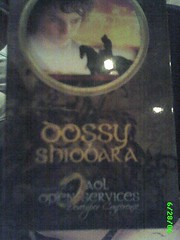 Overall, the first day of the conference was successful from my experience. I attended some great sessions and saw some promising demos, which I don’t think I can openly discuss here in this space, unfortunately. (Maybe I can, I’ll have to ask.) But, what I can tell you is this: if management is serious about what has been said at this conference, I think AOL is going to genuinely surprise everyone who’s counted them out and keeps asking “so why doesn’t AOL have <X>?”

As I said to Sree tonight, “AOL has to start playing to win, not just play to be in the game.” Funny enough, I think if we did play to win, we actually stand a chance of doing it. I’d really like to see it happen.

UPDATE: Armughan Javaid blogs about the conference and has a Flickr set, too.

UPDATE: Sree blogs about it, too.

The gospel lesson this past week was on John 4, where Jesus … END_OF_DOCUMENT_TOKEN_TO_BE_REPLACED

So, I have a TiVo Series 2 stand-alone DVR with a Product … END_OF_DOCUMENT_TOKEN_TO_BE_REPLACED

I honestly thought I would be blogging a little bit more, … END_OF_DOCUMENT_TOKEN_TO_BE_REPLACED