Is DRM finally going away for real?

Back in 2003, when I started working for AOL, there was a race to launch a digital music store for the Windows platform. The company to beat was Apple, who launched their Windows port of iTunes in October 2003. At that time, AOL was still claiming to have over 24 million subscribers. Clearly, if AOL could push out a digital music store offering as part of their service to that many customers before Apple, it might have made a difference.

But, wait … AOL launched its MusicNet offering as early as February 2003, you say? Beating Apple didn’t make much of a difference, after all, right?

I wasn’t directly involved in any of that work at AOL so I’m just speculating here, but I know a lot of effort went into rights management systems and DRM. I’m willing to bet a lot more effort went into getting all that stuff working than actual work on making the product–the music store–kick ass. I kept complaining that AOL should take advantage of its then-800-pound gorilla nature and spend its budget and manpower to invent and pioneer a business model that was DRM-less, rather than spend all that time trying to satisfy everyone’s wacky demands trying to implement DRM.

At the time, I kept hearing responses that all boiled down to: it’s not going to happen. I’ve learned that nothing happens unless someone makes it happen and AOL certainly could have been one to make it happen. This reminds me of a quote I love: “People aren’t resistant to change. Matter of fact, people will change just about anything in order to maintain the status quo.”

Fast-forward five years to 2008: Amazon, Walmart and even Apple

(through iTunes Plus) are offering completely DRM-free music downloads. Somehow, things are changing from “not going to happen” to “it’s happening” to “it’s happened.” What makes me sad is that instead of rendering itself irrelevant, AOL could have pioneered this.

Regardless, I’m happy that we can finally start saying goodbye to DRM for real. Now, companies can start focusing on really innovating where it counts–identifying, funding, producing and distributing quality digital content–instead of on meaningless technology like DRM.

Yesterday, Google announced Protocol Buffers, their data interchange format and API libraries. Before I say anything else, I want to say I’m glad they did it: it uses neither XML nor ASN.1, which means someone at Google has a clue.

What bothers me is that yet again, what was old is new again–their on-the-wire encoding of the data is simply TLV and AOL has been using SNAC/TLV for at least 15 years now. However, AOL’s SNAC/TLV covers a lot more use cases than what Protocol Buffers does. Then, there’s AOL’s FLAP transport for SNAC which Google hasn’t even approached. There’s still a lot more “work” that Google has to do–or, just use what AOL’s already proven works.

Of course, Google gets the community pat-on-the-back because they released this publically whereas AOL still has it hidden behind some proprietary lock and key. AOL, this is another technology opportunity missed: you could have continued to keep your internal, proprietary technology relevant if you’d simply opened this stuff up, first. Now, you’ll have to continue to replace it–at a huge sunk cost–with “standards-based implementations.” Oops.

In the end, I’m glad to finally see someone not blindly drinking the XML Kool-Aid. Maybe there’s hope, yet. 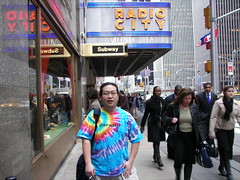 I took a quick trip into NYC today to have lunch with two ex-coworker friends at AOL, Julio and Rob.  As I’ve always said, AOL was a fantastic place to work because of the people and it’s what I miss most about not being there any more.

Julio was kind enough to take this picture of me today and he’s uploaded it to his Flickr photostream and he’s even used it as blog fodder.  I’m always ready to help a friend out, you know?

Jon Miller joins me on the “AOL’s recently unemployed” list

I go away on vacation for a week and what news do I come back to? Jon Miller’s no longer CEO of AOL. I don’t want to say too much about this decision (Ted, Jason and Sree say plenty about it), but let me sum up my thoughts: they’re taking someone who proved his immense capability in three years of AOL’s most challenging times with someone who after 31 years only achieved #2 status at NBC. Draw your own conclusions.

Looks like I’m not alone in the “AOL’s recently unemployed” list. Jason Calacanis and Sree Kotay are also on it, now. The next few weeks will be very interesting to see who else is on it.

Update: Holly is also on the list. As of December 1, so will David Habib, apparently. Ryan Block suggests that Tina Sharkey is leaving AOL, too.

Dossy has left the building

I know news travels fast, but I’m betting there are some folks out there who haven’t heard yet: As of this past Monday, October 30th, I no longer work for AOL. My position was eliminated as part of the ongoing layoffs. Now, you know. So, what does this mean for me?

I truly believe in the cliché that “every time one door closes, another one opens.” This is a tremendous opportunity for me as part of my continuous evaluation of my life. It gives me a moment to think clearly and pursue choices that weren’t as convenient before. I can make a serious attempt at getting Panoptic (my mostly idle consulting business) finally into gear. I can explore new employment opportunities. I can even work on some of the more risky business ventures that I’ve been sitting on for quite some time.

With regard to AOLserver, I was passionate about it before joining AOL and will remain involved with it long after. I firmly believe in the technology’s capability as well as the growing community of users and supporters of it. Through Panoptic, I even hope to be able to spend more time devoted to AOLserver, now that I “own my own time” again.

What all this means is that if you have a project in mind that you think might be a good fit for me, don’t hesitate to let me know. I’d be happy to either bid on the work in response to your RFP, or work out a reasonable hourly rate and work with you on a time and materials basis, or entertain other possibilities. Nothing is out of the question at this point: the opportunities are endless.

Ted Leonsis proudly tells us that AOL is now giving away–for free–it’s superb Parental Controls! If you have children who you let use the Internet, you should take a look at this. Perhaps you were an AOL subscriber and gave up AOL’s Parental Controls when you cancelled your service when you signed up for cable modem or DSL service: now you can have it again, for free, protecting your kids while using your high-speed service.

If you have any questions or difficulties, just let me know in the comments below and I’ll do my best to help.

This is not my beautiful chair!

I worked from our NYC office yesterday and Julio Hernandez-Miyares was there, too. He decided to take a picture of me in front of some cubicle, to highlight the very Dilbertian nature of our White Plains office closing. For your viewing pleasure, here’s me in front of some overpriced non-permanent reconfigurable office furniture: 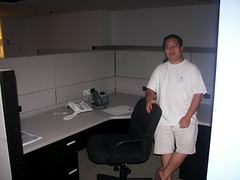 New Space – There is hope!
Originally uploaded by julio.miyares.

As an aside, the title of this blog entry (“This is not my beautiful chair!”) is a line from Weird Al’s Polka Party! “Dog Eat Dog”.

Maureen Govern says, “So long, and thanks for all the fish.”

AOL announced yesterday that Maureen Govern is now our ex-CTO. Her short tenure of just under 11 months spanned September 28, 2005, to August 21, 2006. She was brought in to “realign our technology resources to support the needs of our multiple businesses,” according to Jon Miller. Maureen affirms this saying, “All of this requires AOL to be on the leading edge of technology.”

If she was pressured to leave AOL yesterday over the search query data release, that is a very bad omen. For AOL, being risk-averse is a losing strategy. Punishing people for making innocent mistakes is a sure-fire way to only retain those risk-averse people. Those are not the kind of people who embody entreprenurial spirit–the kind of people who give AOL at least a fighting chance at launching products that might actually win in the marketplace.

It can take weeks to push the simplest of changes through our cumbersome development process. But, Maureen Govern’s “Who’s Who” page is already a 404. Go figure. (Yes, I understand it’s a simple copy change rather than delivering actual product functionality so it’s an unfair comparison, but it still highlights how AOL can react quickly, when needed.)

Wherever you are, wherever you go … Maureen, I wish you the best of luck. Keep doing what you think is best and right. It’s a pity things didn’t work out in your favor at AOL. Keep in touch, it’s a small world out there.

I really suck at goodbyes

The time has finally come for me to pack up my office, 2B-B09, up here in White Plains, NY. Three years ago, around this time of year, I started at AOL and set myself up in this office. I’ve worked with some really great people in this office on a wide range of projects. Over the years, people have come and gone, and the office has become a ghost town, of sorts. Perhaps it is finally time to pack it all in, after all.

Here’s some pictures, to capture some memories, before I put everything into boxes: 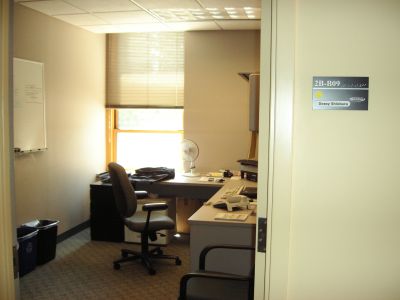 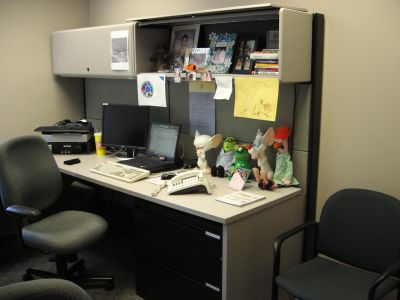 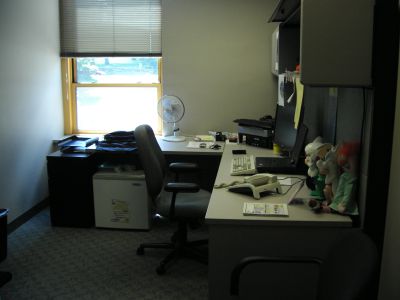 So, what’s wrong with the new AOL CityGuide Beta?

The beta of AOL CityGuide was announced today (see the list of cities in beta). Since my current project–you know, the one that makes me want to find a new job–is tangentially involved with CityGuide, I have some interest in the product.

As Jason Calacanis says, “the first step in sucking less is knowing that you suck.” Unfortunately, society has been so severely perverted by political correctness that folks can’t tolerate anything but constructive criticism. Frankly, that’s a big wad of bull-hooey. Sometimes, your best feedback comes from those who are the most passionate and that can sometimes lead to angry flailing. You can trust me that I’m smart enough to read what you write, listen to what you mean and appreciate the time you took to share it. It’s more important to me that you tell me the truth than the way in which you express it. So, in that spirit, I put forth a few questions:

Of course, I’d love to hear your positive feedback, too! Tell me what you love about the product, what you find most useful, how you couldn’t live without it, and so on. I’m sure the folks working hard on the product would appreciate hearing it, now and then. But, I think if we listen to and act on the negative feedback, it will lead to more people eventually giving positive feedback, so tell me what’s on your mind.

Oh, and just in case you’d never seen the AOL CityGuide product, here’s a quick visual comparison, with links to both: 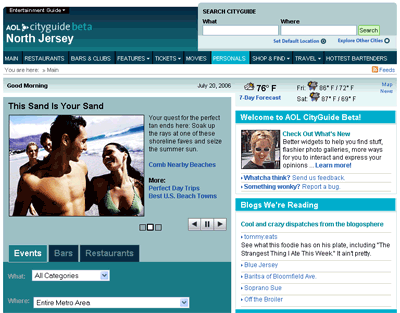 I should be fired

I sit on a lot of things that I want to post to this blog. … END_OF_DOCUMENT_TOKEN_TO_BE_REPLACED

So, it appears that people actually try to set records for … END_OF_DOCUMENT_TOKEN_TO_BE_REPLACED

Squee! My new laptop drive and enclosure have arrived!