I honestly thought I would be blogging a little bit more, since switching from Android to iPhone, since the iOS WordPress app is so nice, but I just don’t seem to get into it. It’s just too easy to post short stuff to Twitter, and photos to Instagram or Facebook …

I think a part of this is the belief that more people follow me on Twitter, or are friends of mine on Facebook, than read my blog.

There are times when I need to write something down because I know my poor rat brain won’t remember it, so I post it to my blog for my future self.

Then, there are times I want to share something with others… and those are the kinds of things I post to social media sites because that’s where I figure I’ll reach the most people. I suppose if I had the kind of audience that celebrities have, I could post everything here… but I don’t.

We arrived a little late, but we made it. Here’s Charlie at WordCampNYC 2012. 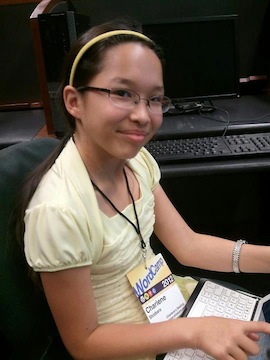 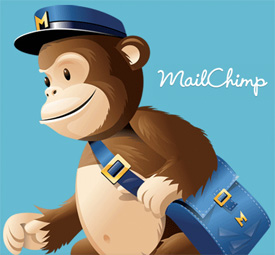 A few dozen people have signed up to receive email updates to this blog, which I’ve used Feedburner for in the past. However, I realize that I don’t have much control over how Feedburner does things, and I’ve finally decided to do something about it.

Now, I’m changing over to using MailChimp to send out the blog updates using their RSS campaign feature.

Using MailChimp, I can have my blog updates emailed out using a custom template, which I’ve styled to look very similar to my actual blog. Now, maybe my choice of colors and style needs serious help, but at least now I have the option, where I didn’t before.

What this all means is, if you’d like to receive (or continue to receive) emailed blog updates, you’ll need to subscribe to this new list. (Sorry!) To make that easier, I’m including a sign-up form below.

Cross-posting from WordPress to LiveJournal woes

I hate to do this, but I’m finally fed up with something that’s been bothering me for a while …

I’ve used a series of various WordPress plugins that mirror posts to LiveJournal, and for the most part, they work great. However, there’s been an issue: whenever I edit a post, it appears to delete the LJ post and post it as new. Not a huge problem, except for the fact that any comments left on the old LJ post are lost, which is a real drag.

I’m starting to wonder if it’s not WordPress or the plugins that are causing the problem, but the blog post authoring app that I use: MarsEdit. I don’t think so, but I haven’t ruled it out yet.

So, I’m posting this entry and will be using it as a test entry in which I’ll try to get to the bottom of things, either fixing the plugin that I’m currently using or otherwise figuring out what the problem is. Therefore …

Don’t post comments on this entry, or at least expect them to disappear suddenly as I test.

Update: This post originally was posted to LJ as http://dossy.livejournal.com/68169.html. Here’s the first edit using the WP web interface directly.

Update #3: Aha! After posting the last edit using MarsEdit, the post on LiveJournal disappeared. A new post on LJ was created, with the latest post content, though: http://dossy.livejournal.com/68462.html. Not sure if it’s really MarsEdit’s fault, or a bug in the WordPress XML-RPC interface that MarsEdit uses, or the way that MarsEdit uses it. For completeness, I’m going to note that the WordPress post_id hasn’t changed regardless of how the post is edited.

Update #4: This reminds me, I need to submit an enhancement request for MarsEdit, to refresh an individual post from the server. Having to refresh all posts and pages just to pick up the edits within MarsEdit that I make in the WP interface is quite cumbersome.

Update #5: I’ve also posted a thread on the Red Sweater MarsEdit forum about this issue, to see if I can get any troubleshooting help there.

Update #6: I posted detailed troubleshooting information to the forum, but the summary is that MarsEdit invokes the WP XML-RPC in a way that marks the blog post as unpublished, then published again, and that causes the WP plugin to delete the LJ post and then re-post it. I’ve gone and made some adjustments to the plugin to NOT do this, so hopefully folks commenting on LJ won’t have their comments so unceremoniously deleted. Ideally, MarsEdit shouldn’t be marking posts as unpublished then republished (seriously, what?) but since I can’t fix that, I can fix the plugin to not delete LJ posts in response.

Filed Under: Blogging, Geeking out, WordPress Leave a Comment

I hereby give myself permission to blog

My Twitter friend Brett tweeted something that I’ve been feeling and struggling with for months and months now. Basically, that there are times where I want to say something “out loud” to my social network, but I know I’ll need more than the 140 characters that will fit in a tweet, but it doesn’t feel large enough to blog about. I end up just “eating” the thought and it never escapes my head, but it’ll bother me for days, because of that need to get it out. 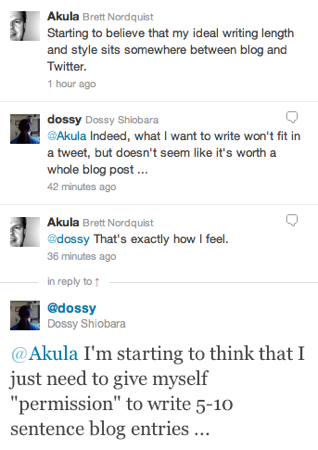 So, I’d like to try a little experiment. I’m giving myself “permission” to write those thoughts out as quick, short little blog entries. I have no idea what’ll happen, but I’ve sat on my hands long enough and it’s time for a change.

This is my flavor of crazy …

So, last night I was pretty deep in the pit of despair. So stressed out, that I was nauseous. What do I do about it?

Instead of sleeping, I stayed up and reworked the design for my blog. I actually think it looks fairly decent, now. 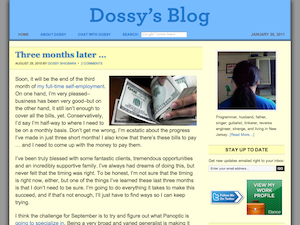 I do love WordPress and how simple it can be to just change out the look and feel of your site with a theme refresh.

Want a custom WordPress theme for your site? I offer such services for a reasonable price. Just ask!

Should I start another blog?

So, lately I’ve been thinking … maybe I should create another blog. One that is totally separate from this one and as anonymous as possible.

You know that saying, “if you’re shocked by what I do say, you couldn’t begin to imagine the things I’m thinking that I won’t say.” Yeah, it totally applies to me. But, I’m realizing that I really need an outlet to get those things out and share them, despite the fallout they’ll create.

I’ve been sitting on what I wrote above, thinking about it more and more. Then, the synchronicity of Chris Brogan’s latest post, “Don’t Be Chris Brogan“, helped me make my decision.

Screw it. This is my blog, for better or worse. Writing here is supposed to be mine. My intent isn’t to drive away readers, but at the same time, if I’m not putting 100% of myself into everything I write and post, I’ll never be happy with it. And, it’ll show. And, I won’t write as much, because I’ll always be doubting whether I should post it or not. And, the stuff worth posting might not get posted and that would be a real shame.

I guess consider this fair warning that, from here on out, Dossy’s Blog is going to be my space to publish whatever I feel I need to get out there. If it strikes a nerve with you, I welcome you to either respond in the comments, or if it really bothers you, stop reading. But, I just can’t do what I’ve been doing. It’s just not working for me.

After several rounds of comments, leading to what I hope are improvements, resulted in this latest iteration of my blog theme: 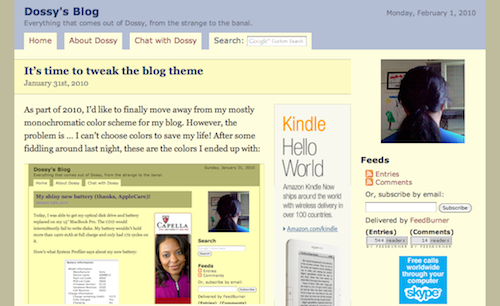 Sure, it looks like someone beat up a clown and then vomited on the body, but it’s progress. As before, any comments would be greatly appreciated.

As part of 2010, I’d like to finally move away from my mostly monochromatic color scheme for my blog. However, the problem is … I can’t choose colors to save my life! After some fiddling around last night, these are the colors I ended up with: 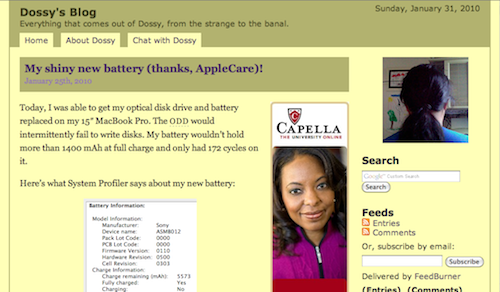 It might not be the worst possible colors to pick, but … ugh, even I know they’re ugly. But, I just can’t choose good colors!

Help me! What colors should I use as the palette for my new theme? I really do like the background color and body text colors I chose … but what about a highlight color? And link colors? Let me know what you think I should try, please!

I normally don’t bother with these memes, but this one was just too awesome to pass up. The results are astounding … So, on with the goodness:

1 – Go to a random page on Wikipedia: http://en.wikipedia.org/wiki/Special:Random

The first random Wikipedia article you get is the name of your band.

The last four or five words of the very last quote of the page is the title of your album.

3 – Go to Flickr and explore the last seven days: http://www.flickr.com/explore/interesting/7days

Third picture, no matter what it is, will be your album cover.

4 – Use Photoshop or similar to put it all together.

5 – Post it and invite your friends to join in. 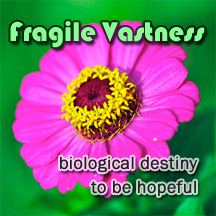 Maureen Govern says, “So long, and thanks for all the fish.”

AOL announced yesterday that Maureen Govern is now our … END_OF_DOCUMENT_TOKEN_TO_BE_REPLACED

At some point in time, something changed on my system that … END_OF_DOCUMENT_TOKEN_TO_BE_REPLACED

This week at work, Michael Andrews asked how to round-trip … END_OF_DOCUMENT_TOKEN_TO_BE_REPLACED

How to migrate a CVS module to Git and GitHub

Since it took me a while to figure out, I figured this might … END_OF_DOCUMENT_TOKEN_TO_BE_REPLACED