I blogged about Scribd back in November 2006 during their beta launch, recognizing that the bright folks behind this startup were on the right track.  In February, they announced some new features and they’re all very cool, but one really jumped out at me:

When they say “very high quality text-to-speech converter” they’re not kidding.  It’s not quite like having Majel Barrett-Roddenberry pretending to be the computer’s voice, but it’s closing the gap.

I’m ashamed to say I didn’t check out this feature when it was first announced!  I only caught it when the Scribd team shared some link love thanking bloggers, linking to my early blog entry.  I’m quite hypercritical and most attempts at computerized speech have been pretty disappointing (to me) over the last 10 years, but I let my curiousity get the better of me and I decided to give it a listen and I’m so glad I did.  You can either download the audio as MP3 or use the embedded Flash MP3 player widget, both in the right-hand navigation as you can see in the screenshot below: 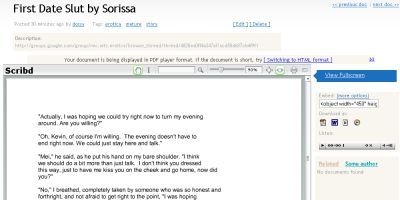 I bet you’re asking “so, who cares?  Text-to-speech isn’t such a big deal.”  Oh, but lets not forget what really drives commercial progress on the Interwebs–porn.  As I titled this blog entry, “rec.arts.erotica + Scribd’s text-to-speech = profit!”  To prove the concept, I’ve taken an excerpt from a lovely little story by Sorissa titled “First Date Slut” and uploaded it to Scribd (which, hopefully doesn’t violate Scribd’s terms of service as it should be considered Fair Use and not infringe Sorissa’s copyright).  Here’s the snippet of text I uploaded:

“Actually, I was hoping we could try right now to turn my evening around. Are you willing?”

“Oh, Kevin, of course I’m willing.  The evening doesn’t have to end right now. We could just stay here and talk.”

“Mei,” he said, as he put his hand on my bare shoulder. “I think we should do a bit more than just talk.  I don’t think you dressed this way, just to have me kiss you on the cheek and go home, now did you?”

“No,” I breathed, completely taken by someone who was so honest and forthright, and not afraid to get right to the point, “I was hoping we’d get to know each other a bit better.”

After much hamster-wheel spinning, as Scribd’s conversion process takes a considerable amount of time at the moment, my lovely MP3 audio transcription was produced!  You can listen to it, all 36 seconds of it:

Like I said, keep an eye on these guys–they’re smart, talented and they’re moving fast.  Just check out the progression of their site header: 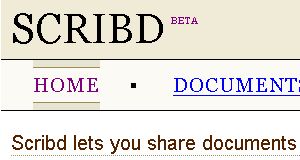 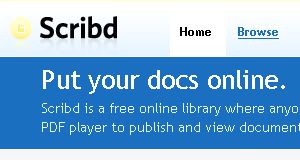 What makes a website a blog? Are comments necessary?

Recently, I found some time to revamp the comments section … END_OF_DOCUMENT_TOKEN_TO_BE_REPLACED

Why yes, I reply to 6 year old emails

Why PRISM, and programs like it, really don’t matter

The government obviously has had this data for quite some … END_OF_DOCUMENT_TOKEN_TO_BE_REPLACED

Getting Adaptec afacli working on Ubuntu

In order to get afacli working on Ubuntu Hardy, I did these … END_OF_DOCUMENT_TOKEN_TO_BE_REPLACED