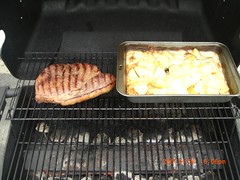 For the meat, I use Kikkoman Roasted Garlic Teriyaki marinade–it comes in a bottle with a purple label with a garlic on it.  I used maybe a few tablespoons of that in a freezer bag with the meat in it, just enough to evenly coat the meat with a very thin layer.  Seal up the bag and give it a good shake to make sure it’s really coated well.

The leeks I cut the green part off and clean then dissect in half, leaving behind just the white and yellow flesh.  Lay it “face down” in the pan (the cut side down), and take my grinders of Kosher sea salt and melange peppercorn over them.  Then, pour a cup to a cup and a half of heavy whipping cream over the leeks, coating them well.

Then, I just peel and quarter 6 small yellow potatos and rest them on top of the leeks and cream.  I think I may have sprinkled a little bit of salt over the potatos, too.

I start the grill getting it up to high heat, then start the leeks in pan on the bottom (direct heat) for 10 minutes.  (I always grill with the lid closed, only opening it to fiddle with what’s inside when I need to.)  Once the cream is bubbling, I reduce heat slightly but still keep it high and move the pan to the top rack for another 10 minutes.  At this point, the cream separates and what looks like clarified butter forms.  I use that clear liquid to baste the potatos so that they’ll roast nicely.

At this point, it’s time to grill the sirloin.  Take it out of the bag and throw it down on the bottom rack.  Sizzle.  Mmm.  Give it two minutes, then flip it over onto its other side.  Sizzle.  Mmm.  Flip it again, but this time lower the heat as low as the grill will go.  Give it around 8 minutes for a one inch thick piece, maybe 12-14 minutes for a 1.5 or 2 inch thick piece of meat.  Flip it onto its other side, give it the same amount of time.

You’re all done.  Turn off the grill, bring the food inside, slice the meat up thin–I try to get it as thin as 1-2mm thick slices–and enjoy!  It’s roughly 15 minutes of prep time followed by 45 minutes of cooking time.

I've been using djbdns and qmail for many years, … END_OF_DOCUMENT_TOKEN_TO_BE_REPLACED

livejournal off the air

I'm still processing the news, and I almost refuse to … END_OF_DOCUMENT_TOKEN_TO_BE_REPLACED

It's official: I just committed the nsingres module to … END_OF_DOCUMENT_TOKEN_TO_BE_REPLACED