(Okay, perhaps it’s not yet “massively multiplayer” but, it could be!)

My latest distraction is a fun web based “game” called TypeRacer, where you “race” against other typists in realtime who are all typing the same text which is often a quote from a book or song lyrics.

I love typing speed measurement games and TypeRacer’s social software aspect and multi-player nature really sets this apart. I’m also a huge fan of educational online gaming. It would be nice to select passages from educational texts to type against your friends–learn something while having fun typing.

I’ve wondered whether there’s truly a better keyboard layout than QWERTY before and have yet to find any solid scientific proof. If Dvorak was measurably better than QWERTY, I would have expected to see two “bands” of scoring on TypeRacer: one of the varied QWERTY-layout typists, and a “break-away” group with speeds far above the rest who are master Dvorak-layout typists.

Either way, I guess I’m going to take a moment to fluff my ego: 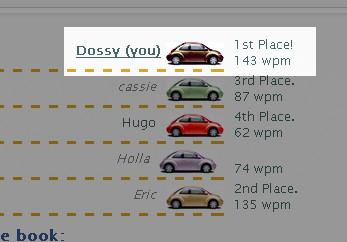 Think you can beat me? Lets set up a type-off and see who’s got the fingers of fury! Bring it on!

It's not fully baked yet, but let me take a break from … END_OF_DOCUMENT_TOKEN_TO_BE_REPLACED

Should I start another blog?

So, lately I've been thinking ... maybe I should create … END_OF_DOCUMENT_TOKEN_TO_BE_REPLACED

My name shows up in Wikipedia, wow

I'd hoped my name would make it into Wikipedia, somehow. … END_OF_DOCUMENT_TOKEN_TO_BE_REPLACED

I'm still processing the news, and I almost refuse to … END_OF_DOCUMENT_TOKEN_TO_BE_REPLACED