At some point in time, something changed on my system that resulted in my printer no longer printing. (Cue a relevant scene from Office Space here…) A quick Googling of relevant keywords didn’t turn up anyone else complaining about what I was observing, so I did what any lazy person would do: I found another way to print what I needed to print, and forgot all about it.

Now, several months later, the problem still persists, and while I found a suitable workaround (use the “Generic PostScript printer” driver instead of the Lexmark one), the hardcore geek in me felt it necessary to struggle against the injustice of this whole “it doesn’t work” thing. It should work, damn it.

First, here’s what the most obvious symptom looks like: 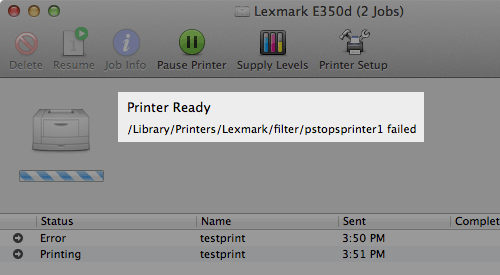 Along with this will be an entry in the system log which you can see in Console.app:

If you look inside the crash report, you’ll see:

Great. Just great. So, we fire up our handy-dandy debugger, and what is the object it’s choking on?

Aww, damn. I recognize what that is. Those are the domains defined in my /etc/resolv.conf‘s “search” parameter.

Well, let’s see what it was trying to resolve, maybe that’ll give us a clue:

Yup, that would be the DNS name of my machine, based on the reverse DNS of my IP address on my local private network. However, it appears that forward DNS for that FQDN isn’t resolvable, due to a recent change in my DNS setup. Let’s fix this, and correct the DNS so that the FQDN resolves, and test again.

Still fails. Damn, not going to be that easy, huh?

Filed Under: Apple, Geeking out

I’m more than just a collection of bullet points

I don't want to go into specific details, but yesterday, I … END_OF_DOCUMENT_TOKEN_TO_BE_REPLACED

Vodacom 3G speed tests in Johannesburg and at Sun City

I recently blogged about Google releasing some of their code … END_OF_DOCUMENT_TOKEN_TO_BE_REPLACED