The Oxford comma, let me teach you it

[ I originally wrote this as a comment on a friend’s LJ in response to his reposting the below image, but wanted to also post the comment on my blog since it’s a subject I feel strongly about. ] 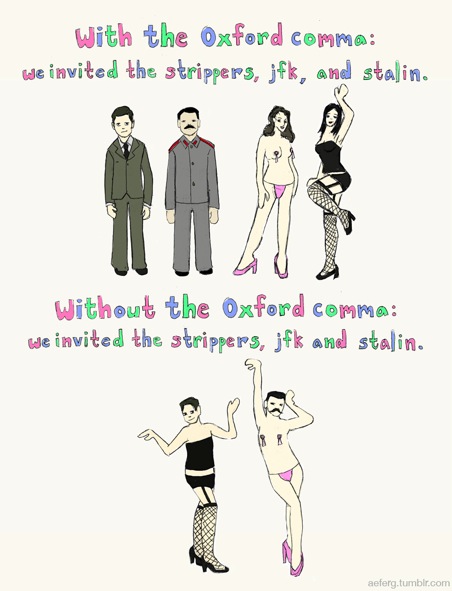 I personally, dislike, the Oxford comma, and, prefer, the Shatner comma.

Seriously, though, most of the examples folks use when illustrating the value of “the Oxford comma” follows this pattern:

In this specific case, I agree, the series (Oxford) comma is necessary. However, if the last three of the list elements are proper nouns, it’s not necessary:

“I went to England, Spain and France.”

Or, if none of the last three elements in the list are proper nouns:

“At the grocery store, please buy carrots, mangos and limes.”

What’s worse is when folks use the serial (Oxford) comma before a conjunction when NOT enumerating a list, like:

Here’s a meme I just couldn’t resist … thanks, Rich.

And, here’s my video:

In the car, on the bus, revisited

Seriously, this is such an oddity of English, one that must have come up before and certainly have been researched and answered by someone of authority, right?

Well, the best I could find searching the web was this entry in the old Language Log blog at UPenn which describes the phenomenon but doesn’t quite explain it. Not being satisfied by this dead-end, I decided to try and come up with a plausible explanation, myself.

What I came up with was this: “In my opinion, if you can ride while standing on a vehicle, you ride on the vehicle. If you must ride sitting, you sit in the vehicle.” This seems to hold for most of the examples cited in the Language Log entry linked above, except for bikes, which you certainly ride on, but ride while seated.

I guess I’ll have to admit that I’m a closeted wanna-be linguist, because I find languages so interesting. I’d venture to guess that most above-average intelligence native English speakers can naturally choose the correct preposition, either “in” or “on”, when referring to modes of transportation, but how do we do that? It seems natural and innate but there’s no way to codify a rule that describes its correctness? How can that be?

What do you think? Can you see a rule or set of rules that correctly describes the proper preposition in all these situations? Do you have insight into how we can naturally determine which preposition to use, but fail to express concise rules for such selection? Do you even care about this at all?

Let me know in the comments below.

I've always known that I'm not like most other people, but … END_OF_DOCUMENT_TOKEN_TO_BE_REPLACED

During this past Monday's therapy session, I said something … END_OF_DOCUMENT_TOKEN_TO_BE_REPLACED

Blackbird 0.5 is out of beta and is now available. Help … END_OF_DOCUMENT_TOKEN_TO_BE_REPLACED

May God hold you in the palm of his hand

Lots of miles on our Bosch WFK2401UC washer motor

(Disclaimer: I'm not an appliance repair technician, just a … END_OF_DOCUMENT_TOKEN_TO_BE_REPLACED