Could Obama be the new Pragmatic Party?

In May 2006, Scott Adams described what could be called the “Pragmatic Party” (sadly, his blog archives were nuked, but you can still read my entry). Last Tuesday, Barack Obama was elected President. Two days later, we have this website, change.gov: 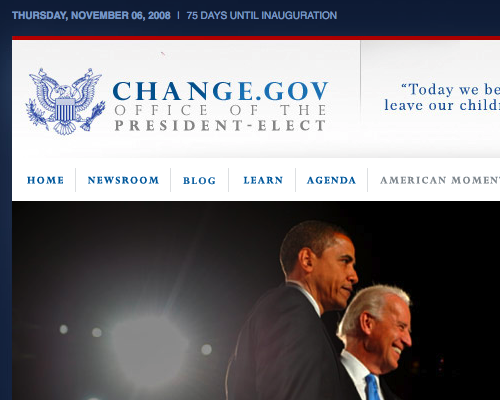 Could Obama really be doing what Adams suggested? I was skeptical about Obama’s rallying cry for change, but this is incredibly hopeful looking.

Pragmatic Party and Scott Adams in 2008

I’ve said it before that I think Scott Adams should run for President in 2008, but today he cemented it. He blogged about his Pragmatic Party fantasy, imagining and describing his campaign platform, his Presidential approach and other goodness.

You need one Big Idea when you run for President. I would explain that our current system of government was conceived prior to the Internet, electronic mass media, and sophisticated polling methods. 200 years ago the only practical form of government involved voting for a small group of individuals that would pretend to represent you. Now we have better tools and we should use them. […]

I’m eligible to, but have never voted in any US government election. But, I might seriously consider Scott Adams and the Pragmatic Party as a write-in for 2008.

Exactly what does it take to get officially listed on the ballot? How much funds need to be raised? What’s the process involved? This is serious. If Ronald Reagan could see two full terms as President and Arnold Schwarzenegger can be Governor of California, then Scott Adams can certainly be President for a term.

My father’s key to success: Don’t be too smart

I blogged about Scribd back in November 2006 during their … END_OF_DOCUMENT_TOKEN_TO_BE_REPLACED

It doesn’t get better