A simple “google for” Tcl script

I make extensive use of Google throughout the day and I’ve always got “g” set up as the keyword for a Quick Search in Firefox. However, I also spend a lot of time at shell prompts, and sometimes I don’t want to bounce to a browser just to Google for something.

So, tonight, I wrote a small Tcl script that lets me “google for” at the prompt. Just save the previous link and rename it to “google” and move it somewhere in your PATH like /usr/local/bin, then make it executable with chmod 755.

The script requires Tcl with tDOM installed, as well as Tidy–both of these things are installed out-of-the-box on MacOS X 10.5 Leopard.

Once you get the script installed, you can do something like this: 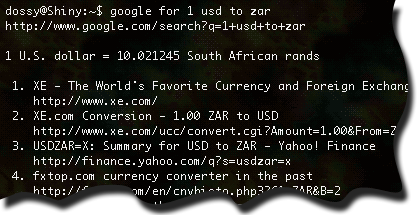 If you notice, for Google search queries that have a special result like the one above, the script displays it separately before the results. The script also emits the search query URL so you can just Control-click on it in Terminal and then select “Open URL” and have it pop up in your browser, which also works for any of the search result URLs.

I don’t know if anyone else would find this script useful, but it’s already saved me a ton of time–especially when I’m on a slow 64 kb/s GPRS connection like I am this evening. Either way, I’m releasing this script into the public domain.

Yesterday, I sat down and finally reviewed the patch that … END_OF_DOCUMENT_TOKEN_TO_BE_REPLACED

What seems, to me, to be a thoughtless, knee-jerk response … END_OF_DOCUMENT_TOKEN_TO_BE_REPLACED

Walking the virtual streets, looking for a good time

Now that I'm back to freelancing full-time, standing on the … END_OF_DOCUMENT_TOKEN_TO_BE_REPLACED

Programming is writing, too

This morning, I came across Serdar Yegulalp's blog entry … END_OF_DOCUMENT_TOKEN_TO_BE_REPLACED