Pidgin is a multi-protocol IM client (formerly known as “Gaim”) that is available on various platforms (Linux, Win32).

Recently, someone asked in #pidgin about a feature request to make libpurple parse the IRC 352 messages, which are returned in response to a WHO command. I said I could throw together a quick patch to make this happen and I’ve got something working now. 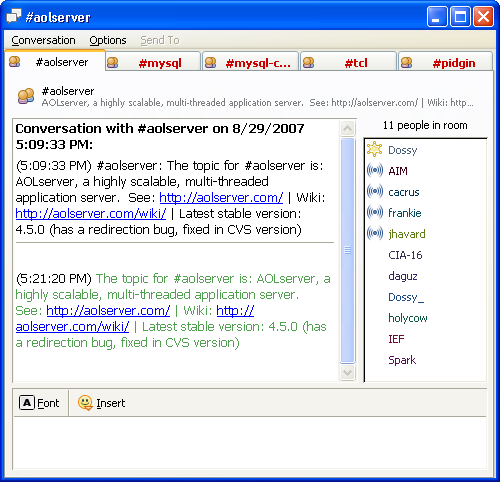 After the patch, you can issue a “/quote who #channel” which will send the literal command “who #channel” to the IRC server, to which it will send the 352 response messages. My patch makes libpurple parse these messages and set the PURPLE_CBFLAGS_AWAY flag on the appropriate user’s PuprleConvChatBuddyFlags record. The result looks like this:

You can now see user “Dossy_” is set away by the status icon (the clock, cirlcled in green in the screenshot).

Of course, there’s a few big caveats with this patch:

Here’s the patch against the Pidgin 2.1.1 source tarball:

If you have any questions about or issues with the patch, leave them in the comments below.

Saying goodbye is hard to do

All it took was this unpopular post, and I lost half of my … END_OF_DOCUMENT_TOKEN_TO_BE_REPLACED

A few weeks ago, I was talking to a friend of mine who works … END_OF_DOCUMENT_TOKEN_TO_BE_REPLACED

Shawn Christoper asks Dossy, “What do you do for AOL?”