Covering large areas with some Linksys WRT54GS’es and DD-WRT

I recently helped a friend of a friend with a wireless networking setup who has a Seriously Large House–we’re talking easily 10,000 sq. ft. per floor, and the house has 3 floors. Yeah, it’s that big. They had set up a Linksys WRT54G and two WRE54G repeaters and, no surprise, had horrible signal coverage and frequent packet loss, and this was just trying to provide connectivity to a single floor in the house. Needless to say, they were not pleased, so I was invited to take a look and fix things.

Oh, a word of advice–if you recall, I bought one of those WRE54G’s back in May 2007–don’t waste your money on them. They cost more than the WRT54GS, can’t run DD-WRT as far as I know, and they only have one antenna, which means losing half your bandwidth per repeater hop. There’s absolutely no reason to  use them, whatsoever–unless you’re not willing to figure out DD-WRT, of course. 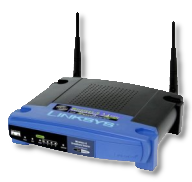 So, I configured one WRT54GS as the master which has the WAN uplink providing network access to the wi-fi cloud. The remaining WRT54GS and WRT54G were configured as repeater bridges, all with the same SSID to facilitate roaming which worked perfectly–only one (!) packet dropped when roaming between AP’s. I did crank the power up from the default 28mW to 60mW which made a significant difference in signal range and coverage.

With this, there’s reasonable coverage on the first floor, but most importantly full coverage on the second floor which is where they were most interested in. The third floor gets good signal strengh in spots, but that’s adequate for now.

Overall, for the price, the Linksys WRT54GS is a fantastic product and when used with DD-WRT, can be used qutie effectively.

What happens when you give ultimate power and unlimited … END_OF_DOCUMENT_TOKEN_TO_BE_REPLACED

(Okay, perhaps it's not yet "massively multiplayer" but, it … END_OF_DOCUMENT_TOKEN_TO_BE_REPLACED