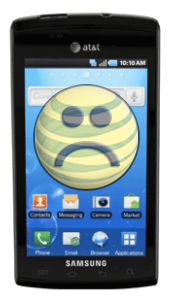 Despite the news that RIM was going to finally launch a new touch screen slider phone “any day now,” which did finally launch as the BlackBerry Torch 9800, I decided to give an Android phone a serious look.

After looking at the various options that at&t offers, I decided to give the Samsung Galaxy S-based Captivate (details: Samsung, at&t) a try. I ordered three new phones–one for me, one for my wife, and one for my Dad–at the start of August, and by the 6th, we had our phones in hand.

Right off the bat, I’ll have to admit that I went into this with extremely high expectations. I know, big mistake. To be honest, after dealing with BlackBerry phones for the last two-plus years, I was excited at the prospect of finally getting on a modern platform that didn’t involve using that crappy iPhone OS.

My first disappointment was the “Email” app that ships with Android 2.1 on this phone. Apparently, I’m not alone, so much so that folks have forked the code and released their changes called K-9. However, K-9 still has its warts: I can’t figure out how to copy-and-paste text from an email message, without “replying” to it and copying from the quoted text area, then discarding the reply. Perhaps I’ll “fix” this and submit a patch.

Next, the lack of out-of-the-box wi-fi tethering was disappointing. I went and rooted my Captivate and then installed Android Wi-Fi Tether on it. Having a free, open source “solution” is a great thing, but certainly not for the average, non-technical consumer.

The Calendar app. isn’t too bad, but I sadly discovered a shortcoming in it: there’s no way to duplicate an event. I’m not talking about creating a recurring event, but taking an event and duplicating it. Suppose you have an event, like a doctor’s appointment. You go to your appointment, and at the end, you schedule your follow-up appointment. It’d be really convenient to be able to just copy your current appointment, and paste it on the new date and maybe adjust the time. Can’t do that with the stock Calendar app on the Captivate. You have to just add a new event and enter in all the data. Annoying, to say the least.

Battery life also seems disappointing. The specs claim over 300 hours (over 12 days) of standby time, and over 5 hours of talk time. Given the amount of email and Twitter and Facebook I get, even at an hour interval for refreshes and K-9 mail set up to do IMAP “push,” my battery seems to last around 4 hours before needing a charge. I suspect the 3G data use of the cellular radio uses more juice than voice “talk” time … and the notion of “standby” time is a bit misleading, since when the phone is doing background data tasks, it’s really not “in standby” as its actively using the radio.

Another huge problem is the fact that GPS on the Captivate appears to be totally broken. The TeleNav GPS navigation application is pretty much unusable, with it not being able to track your location properly, which causes it to constantly reroute as it tries to figure out where you are. Supposedly there’s a workaround, where you can manually reconfigure the phone to use Google’s Location Server, which I’ll try soon, but again, this is just poor out-of-the-box experience and “fixing it yourself” isn’t really a satisfactory solution for a non-technical consumer.

On one hand, I wonder if I should have bothered making the switch from BlackBerry to Android, yet. Despite my complaints with RIM and BlackBerry products, the few things they could do, they did reasonably well. But, I’m tired of waiting for RIM to catch up. Maybe the next generation of touch-plus-slider devices following the Torch 9800 could be an option, but for now, I’m going to stick it out with the Captivate, hoping that Android 2.2 brings some fixes, along with community-developed Android functionality closes the gap between “sucks badly” and “usable on a day-to-day basis.”

Filed Under: Geeking out, Piss and moan (Rants), Product placement

I set out to build myself a new desktop and HTPC. I chose a … END_OF_DOCUMENT_TOKEN_TO_BE_REPLACED

Over the years, I've implemented and re-implemented the … END_OF_DOCUMENT_TOKEN_TO_BE_REPLACED