The shiny new toy at SXSW this year was Twitter, a “social away message,” where you send all of your “followers” a short (140 character) message.  I’d joined Twitter (you can follow me here) back in January 2007, long before SXSW, and was frustrated by the lack of local Twitterers–those in and around northern NJ.  Of course, I figured this had to be a function of my living on the bleeding edge of technology: the late adopters would eventually catch up and catch on and I would finally discover some geek neighbors.

If anything, SXSW attracts geeks from around the country and around the world and the “SXSW Interactive” part ended two days ago.  I’m guessing that folks who are likely to check out Twitter after hearing about it at SXSW have done so by now.  Right?

One of the cool things about Web 2.0 is the likelihood of open APIs, which Twitter has.  Open APIs combined with Google Maps yields a very simple but effective mashup, Twittermap, which plots public Twitter activity on a map.  Perfect, I thought, I can finally discover what other geeks are nearby!  Look below for a screenshot of the Twittermap of northern New Jersey: 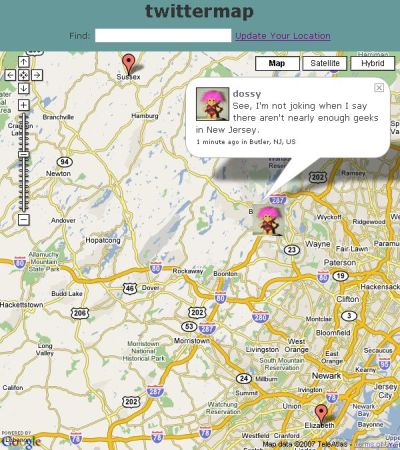 Disappointing doesn’t even begin to describe this.

Nobody really wants to celebrate death

Hey, Og, I just wanted to comment on your blog entry but … END_OF_DOCUMENT_TOKEN_TO_BE_REPLACED

I normally don't bother with these memes, but this one was … END_OF_DOCUMENT_TOKEN_TO_BE_REPLACED

Dossy’s hCard, if you care about microformats

Since Tantek Çelik announced in his blog, Technorati … END_OF_DOCUMENT_TOKEN_TO_BE_REPLACED

Snow Leopard: Bring on the pain!

MacOS X 10.6.0 Snow Leopard was released over a month ago on … END_OF_DOCUMENT_TOKEN_TO_BE_REPLACED