It all makes perfect sense … 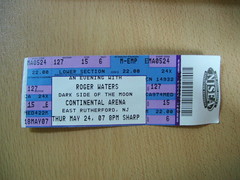 Last night, I was able to see Roger Waters perform live at the Continental Airlines Arena in East Rutherford, New Jersey. If you don’t recognize the name, he’s the voice you probably recognize when you listen to Pink Floyd songs.

I’d continued to follow him during his solo career and fell in love with the Perfect Sense song I quoted above, but when the tickets said “Dark Side of the Moon,” I was expecting only Pink Floyd material. But when he finally played the song, I was in my happy place. They could have played boy band covers for the rest of the evening for all I cared; I was fully satisfied.

Another treat was hearing a song he’d written recently called Leaving Beirut, which is so full of emotion that it left me incredibly sad and angry afterwards. But, it also filled me with joy and happiness, because it also meant that there are still people who understand what caring about others and sharing what (little) you might have can do to make life just that much more bearable. Roger does his part by sharing this narrative with us. 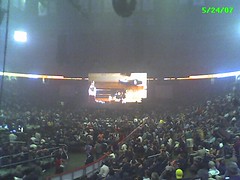 It was a fantastic concert and the place was almost packed. The hum and buzz and energy was very palpable. When we left, sometime close to 11 PM, I was more energized than when I’d gotten there at 7:00 PM. This was exactly the kind of de-stressing I needed after the last two weeks and everything that’s been going on.

Thank you, everyone who made last night possible, especially the person who was kind enough to get us these tickets!

The World According to Scoble: Robert Scoble realizes his … END_OF_DOCUMENT_TOKEN_TO_BE_REPLACED

Is it wrong to poison candy? Is it more wrong than stealing?

With the proliferation of wireless computing technology (aka … END_OF_DOCUMENT_TOKEN_TO_BE_REPLACED

Since Oracle owns MySQL through its acquisition of Sun, more … END_OF_DOCUMENT_TOKEN_TO_BE_REPLACED

What happens when you give ultimate power and unlimited … END_OF_DOCUMENT_TOKEN_TO_BE_REPLACED

So, today on ABC News, they're running an article entitled … END_OF_DOCUMENT_TOKEN_TO_BE_REPLACED