Since announcing Twitter Karma on December 29th, it became popular pretty quickly in the Twitter community. I watched the traffic come in from various sources and being interested in this sort of thing, I wanted to know exactly what kind of impact it had on my overall traffic.

Using Google Analytics and Site Meter, I’m able to keep an eye on my traffic and get some useful metrics about it. Lets start with a graph of the past 7 days worth of visits (yellow) and page views (orange) from Site Meter: 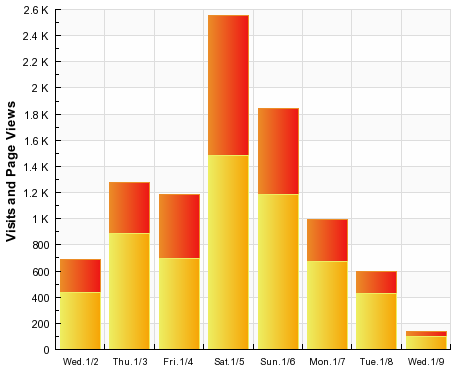 What’s immediately interesting to me about this graph is that, previously, my weekend traffic was usually lower than my weekday traffic. However, the Twitter Karma traffic peaked on the weekend, which surprised me.

To separate out my regular blog traffic, I pulled the Top Content report for the same timeframe:

To be honest, ~4,500 visitors isn’t a big number at all. What makes me really curious is finding out how many “active” users the Twitter service has. What percentage of that total does 4,500 users represent over that time period? Less than 1%? 5%? 10%? 50%?

I’m sure the Twitter guys aren’t going to open their kimonos that wide and share that kind of information with us, but I wonder if there’s any way to collect that information anyway. I guess I could sample the public timeline every few seconds for a few weeks, then compute the uniques and update frequency to come up with an estimate. This won’t take into account those who have their updates protected, but I’m willing to bet fewer than 20% of Twitter’s active users have done that.

Still, this was a fun application to hack together and it seems to be well-received amongst the Twitter community, so I’m really happy with it. I hope someone can come up with another great tiny app. idea for Twitter that I can hack on, next.

I know this is old news, but before it disappears into the … END_OF_DOCUMENT_TOKEN_TO_BE_REPLACED

(Originally, I wrote this up on the Tcl'ers Wiki but wanted … END_OF_DOCUMENT_TOKEN_TO_BE_REPLACED