I cancelled my SourceForge subscription today

So, the AOLserver.com site, which has been hosted at SourceForge for years, is effectively “down” right now as requests to it are returning a “Error establishing a database connection” error. I’ve been a paying subscriber for SourceForge since 2004 because they claim to provide “priority support”–whatever that means.

Well, I went and opened “priority” support tickets to try and get the AOLserver.com site back online. To put it gently, the response I received was less than useful. I mean, three hours before I get a response–a canned response–which doesn’t even resolve my problem?

I recognize there’s not much I can do at this point, but what I can do is “vote with my wallet” … I’ve cancelled my SourceForge subscription today: 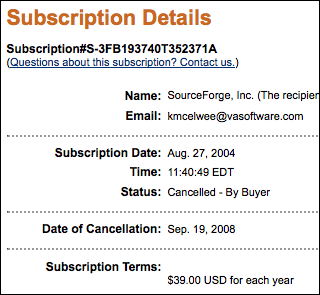 The clock is now ticking: they have just under a year to show that they can seriously run a valuable service correctly, or I won’t be renewing my subscription next year.

Update: Jacob Moorman, Director of Operations at SourceForge.net, emailed me to point out that the IP addresses for SourceForge’s VHOST had changed. Sadly, the DNS for aolserver.{com,net,org} had been set up as A records instead of as CNAME records. :-( So, I’ve sent a request to have the DNS updated.

speak with your vote: abstain.

In celebration of the 2004 US Elections, I figured I'd link … END_OF_DOCUMENT_TOKEN_TO_BE_REPLACED

Okay, after being fed up with my Dell Latitude C840's … END_OF_DOCUMENT_TOKEN_TO_BE_REPLACED

I absolutely hate computers. After a bout of system hangs … END_OF_DOCUMENT_TOKEN_TO_BE_REPLACED

After hearing about the Taproot Foundation from Jennifer, … END_OF_DOCUMENT_TOKEN_TO_BE_REPLACED

A few days ago, the family came down with some kind of tummy … END_OF_DOCUMENT_TOKEN_TO_BE_REPLACED