Back in April 2007, when I decided to switch over from Bloglines to Google Reader for my RSS reading pleasure, I made a point to complain about the fact that Google Reader had no easy way to search for entries within your subscriptions. The good news is apparently that all changed, yesterday: Google Reader now has a search box!

This is good news, since that was pretty much the only feature I’d actually missed when I gave up Bloglines. It’s good timing on Google’s part, since the latest Bloglines beta UI improvements have really closed the gap–although I’m not happy enough with them to consider switching back, yet.

Filed Under: Believe it, or not, Geeking out Leave a Comment

I was out earlier today picking up food from Chili’s and as I pulled up to the To-Go entrance, I saw the signs above the spaces and cracked up laughing. I just had to capture it, in case it’s something local to this particular Chili’s. Here it is: 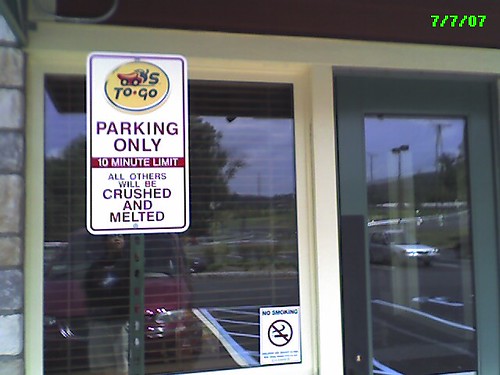 To whoever decided to have these signs made up with this copy text, I salute you.

My name shows up in Wikipedia, wow

I’d hoped my name would make it into Wikipedia, somehow. I’ve joked around saying that it would be a great birthday present. Wouldn’t you know it, shortly after my birthday last year, it happened.

The article where my name first appears isn’t exactly something to brag about: it’s the one about the Year 2038 problem. Folks running AOLserver using an ACS-based configuration experienced a strange halting problem because of a configuration parameter that resulted in the server hanging on May 12, 2006. Still, my name was included in the article in its references on November 19, 2006! Thanks, Mipadi–who performed the edit.

I’m still hoping that someday, I do something noteworthy enough to warrant my own “Dossy Shiobara” Wikipedia article, but for now, I’m happy with a cursory mention, at least. It gives me a reasonable goal to strive for.

Filed Under: Believe it, or not, Dossy, Dossy and more Dossy!, Geeking out 1 Comment

Last year, on April 5th, it snowed in Butler, NJ. Wouldn’t you know it, but this year, it snowed again–even though it isn’t sticking and by 9:26 AM, it seems to have stopped. Here’s a satellite image of the area with the radar overlay showing snow: 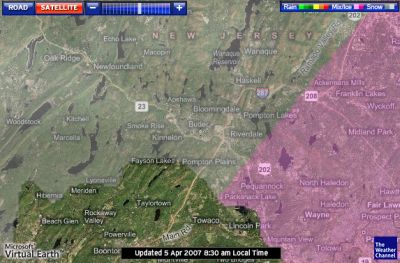 Do those knobs and switches really do anything?

Scott Adams blogs about the marvels of the modern airplane cockpit, speculating that airplane manufacturers include many unnecessary controls not connected to anything in order to charge more … and I think he’s absolutely right.

Several years ago, we bought a Sony VCR that had a “Reality Regenerator” button and light on it. I don’t think I want to admit that we chose this VCR over the others because it had this Reality Regenerator, but maybe it played into the decision making. (Congratulations, Sony marketing geniuses.)

So, we were amazed that, no lie, this VCR claims to regenerate reality. I mean, it’s like Jesus in a set-top box. But, exactly what does regenerated reality look like? I’ve owned several VCR’s before this one and several after and let me tell you, Sony’s regenerated reality looks just like the reality of all my other VCR’s. I largely suspect that this was just an unnecessary control that was nothing more than a button connected to a light. Push the button, the light goes on. Push the button, the light goes off. In either state, reality as rendered on the television looked the same. But, we bought the VCR.

I sure hope we didn’t pay more for the VCR than the VCR’s that couldn’t regenerate reality.

All I have to say is: what do you expect from a place called “Cracker Barrel”? I mean, I’m not saying it’s okay to racially discriminate–being that I’m not white, either, it sucks when you’re “on the outside, looking in.” But, what, do they need to rename the place “Chez Whiteys” for people to figure it out?

Don’t even get me started on the “Cheesecake Factory” …

Filed Under: Believe it, or not 7 Comments

Everything I needed to know in life …

… I learned from fortune cookies. I have one taped to a monitor sitting on my desk that reads:

“A man can fail many times, but he isn’t a failure until he gives up.”

I don’t know why I had to blog this, but I just wanted to remind myself of it and share it with all of you. True wisdom in only 15 words. Word.

Is Splenda really as bad as people think?

Jason blogs about the evils of Splenda at Netscape. It’s unfortunate that the safety of artificial sweeteners such as Aspartame and Sucralose (Splenda) is still uncertain today.

Here’s the petition to the FDA from July 2002 to recall Aspartame as a neurotoxic drug: Docket 2002P-0317. Here’s a link to an FDA statement from May 2006 on the European Aspartame Study, where the FDA still claims “[…] the agency has not been presented with scientific information that would support a change in our conclusions about the safety of aspartame.”

Here’s the petition to the FDA from April 2006 to revoke regulations that allow Sucralose as a non-nutritive sweetener in food: Docket 2006P-0158. There’s recent studies from earlier this year that suggest Sucralose may be a trigger for migraines: Migraine triggered by sucralose–a case report, Popular sweetner sucralose as a migraine trigger. I suspect there plenty of opportunity to further study Sucralose than has already been performed.

To see a list of scary things that are “safe” to put in foods, check out 21CFR172: Food and Drugs: Food additives permitted for direct addition to food for human consumption. It’s quite scary how many artificial ingredients can be “safely” glommed onto food products.

I’m sympathetic to people who may have been harmed by artificial sweeteners. By explicit preference, in our household, we do not purchase products that contain artificial sweetners: yes, that means my kids get sugar–real sugar–and I’m okay with that, in moderation. I do, however, realize that all these claims (and until there’s scientific proof, that’s all they are) may not be true and I would really hate to see the FDA buckle under pressure of popular opinion and wrongly remove these sweeteners from the market. I also realize that there’s a big difference between scientific information being inconclusive and there being enough evidence to determine safety. I want what everyone should want: foods that are safe to eat. The FDA has the difficult task of trying to provide this.

It takes grant money to teach kids to cross the street? Are you kidding me?

Apparently, the Morris County DOT received a $150K grant from the NJ Transportation and Planning Authority to teach kids to walk to school in Wharton, NJ.

Twenty-three seventh-grade students from a pre-algebra class at MacKinnon Middle School took part in a “walkability” study in March to evaluate three routes to school that were designated safe by the borough police department.

Is this for real? I really want to see what the other routes that weren’t designated safe actually look like. What, are there potholes at the crosswalks or something?

This kind of modern parenting is making me sick to my stomach. If you can’t adequately teach your child to navigate reasonable risk: crossing streets, walking less than 3 miles to school, etc., then how do you ever expect to teach them to handle dangerous risks, like drugs and violence? I’m in favor of reducing unnecessary risks, but you also have a responsibility to teach kids respect for danger and risk by exposing them to it in safe and controlled ways. If you make generally safe activities too safe, you reduce the opportunities for your children to develop the emotional and intellectual tools required to handle danger in situations where it really matters.

I am ashamed of being a parent today, watching what is ridiculous stupidity become “normal.” When it takes $150K to teach a school full of kids to walk less than 3 miles to school safely, we have failed them as parents and educators.

Rockin’ out my guitar at Sunday school

Today marks the start of me playing guitar with the children in Sunday school at my church. My guitar-fu is weak, but the only way to get better is to practice, right?

The idea is that the kids have been singing songs in Sunday school a capella, but it’s more fun to sing along to an instrument, right? So, I volunteered to play along on my guitar. Today, I played “Hallelu, Hallelujah!” and the kids sang! I think I played it a little too fast … and the voices of the 20-odd kids really drowned out my unamplified acoustic guitar, anyway. But, it was still lots of fun and I’m looking forward to doing it again next week.

Filed Under: Believe it, or not 4 Comments

Okay, since blonde is my favorite color, this caught my eye … END_OF_DOCUMENT_TOKEN_TO_BE_REPLACED

breaking these chains of love

OK, I don't know how I possibly missed this, but last month … END_OF_DOCUMENT_TOKEN_TO_BE_REPLACED