Blackbird 0.5 is out of beta and is now available. Help spread the word and let your BlackBerry-owning friends know about it!

This is “high speed” EDGE?

This is my BlackBerry Curve 8310 tethered to my MacBook Pro over Bluetooth:

Not the “high speed 3G EDGE” I was expecting. Is this really the height of technological achievement for 2008? Where’s my flying car? Jeez.

It was only a few months ago that Brad linked to Twitter Karma over at DownloadSquad, but a few days ago Christina surprised me by putting Blackbird at number 5 on her list of 10 awesome BlackBerry apps. She writes:

Blackbird — I used to use Twitterberry to update my Twitter status from my phone, but now I’ve switched to Blackbird. The interface is cleaner and it feels faster. I miss the user icon pictures from Twitterberry, this is still my favorite way of using Twitter.

Man, I love those DownloadSquad bloggers! Thanks for the love, Christina.

About a week ago, I mentioned on Twitter that I was working on a Twitter client for BlackBerry smartphones called Blackbird.

After an initial limited release to a few people, I think it’s ready for general use. I’ve already stopped using TwitterBerry and TinyTwitter, now exclusively using Blackbird and I don’t miss a thing.

If you have a BlackBerry and are a Twitter user, I’d love it if you’d go and install Blackbird and let me know what you think! It’s still fairly new and it’s my first BlackBerry application, so I’m sure there’s lots of ways I can improve it.

Filed Under: BlackBerry, Geeking out 11 Comments

I’m selling a BlackBerry 8830 World Edition Verizon phone on eBay for a friend. The auction will end next Friday, February 22nd. If you’re interested in it or know someone who is, please go and bid on it. 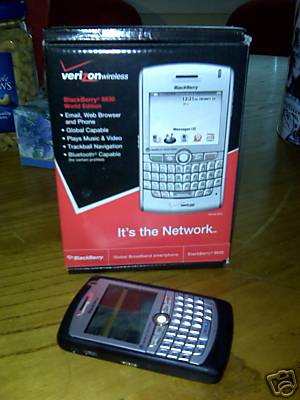 Life is sweeter with the ‘Berry

After not being able to get data services on my Treo 650 last week, I finally had enough. It was over two years old and I was eligible for an “upgrade.” It was time to say goodbye to Palm and its aging hardware and operating system and move on to something more modern … or at least, switch to a product from a company that’s a little more commercially viable. I considered the Apple iPhone, but just can’t bring myself to pay the ridiculous “Apple Tax”–the extra money you pay for Apple’s fancy design. When a carrier offers the iPhone for $99, I might consider them.

What at&t was offering for $99 this time around was the Blackberry Curve 8310 [at Amazon]. So, on February 4th, my wife and I went to the Willowbrook Mall at&t store and bought them. I also picked up an Aliph Jawbone [at Amazon] Bluetooth headset for myself and she chose the Motorola H12 [at Newegg] Bluetooth headset. We could have saved some money ordering it all online, but there’s something to be said for immediate gratification, being able to walk out of the store an hour or two later with everything just working. However, I did end up ordering two Sandisk 4GB MicroSDHC memory cards for the phones from Amazon.

I’m not going to try and do a full review of these products as there are already plenty out there if you search for them. What I will do is list the things that I discovered, especially stuff that surprised or disappointed me. It’s going to be completely subjective and folks may not agree with what I point out as being important, but they’re important to me.

(1) The 8310 has GPS which is very cool, but TeleNav’s service is $9.99/mo for unlimited routes. Ouch. Still, the software and service seems excellent so far and it’s still cheaper and more convenient than buying a dedicated GPS unit.

(3) The Blackberry OS 4.2 that currently ships with the device doesn’t let you record video. Luckily, RIM is working on their next upgrade, OS 4.5 (formerly referred to as OS 4.3.1, apparently renumbered by marketing) that will. I just hope they don’t keep slipping the anticipated release date over and over. Anyone know how to get into their beta program? I’d love to play with the beta release.

(4) Even though the 8310 has GPS, it appears that pictures taken with its camera do not store the GPS location in the image’s EXIF data. Again, not a big deal but something that I had expected and it not being implemented surprised me.

(5) The push-email sync. delay is a lot longer than I expected. My guess is that the Blackberry Internet Service doesn’t poll my IMAP mailboxes as frequently as I’d hoped, because even manually performing a “Reconcile Now” doesn’t seem to help. I’m guessing they only poll every 10-20 minutes which isn’t that bad, but not having a proper manual “sync now” that triggers the back-end poll is a let-down.

(6) When paired with a Bluetooth headset, answering the call with the green phone button defaults to the headset. I expected that answering the call by pressing a button on the phone would default to activating the handset. If I wanted to answer the call on my headset, I would have used the headset to pick up the call. This matters because I often have my phone in my pocket but leave my Bluetooth headset in my jacket pocket; I only wear it when I’m actually out and about. So, when I receive a call, I’ll grab my phone and answer it but the phone sends the call to the headset–argh! I then have to hit the menu button and select “Activate handset”, or press the $/Speaker button to use speakerphone, to actually talk on the phone. At the very least, this needs to be a configurable option in the phone application, whether to answer the call using the Bluetooth headset or on the handset.

(7) The Jawbone is an awesome headset. The noise cancellation really works well. It’s really comfortable to wear; it feels lighter on the ear than it actually is. But, it’s butt-ugly. I mean, it’s embarassing to wear this thing in public, it’s so ugly. When you buy the Jawbone, you’re definitely not buying it for the looks, that’s for sure. But, if you spend a lot of time talking on your cellphone, especially in public places or, like me, in the car with the window open, this headset will not let you down.

(8) On the other extreme, the Motorola H12 is gorgeous. It is small, lightweight and aesthetically pleasing. Even the charging base looks great on a desk and the use of magnets to attach the headset to the charging contacts on the base make my inner geek go “squee!” The sound cancellation on the H12 is adequate, but I’m not convinced it’s nearly as good as the Jawbone. However, where the H12 falls short in technical quality compared to the Jawbone, it more than makes up for it in sexy. I’m actually tempted to return my Jawbone in exchange for another H12, for just this reason.

That’s it for now. I’m anxiously awaiting the Blackberry OS 4.5 and what improvements it will bring. I’ll post an update once it arrives.

Do you have a Blackberry? Have any tips for me? Your favorite applications that you think I might enjoy? Any cool undocumented features or shortcuts that you’d like to share? Please tell me about them in the comments here.

Life according to Heroes, the TV show

AOL gets buzz for open-sourcing Milkdrop, AVS, Ultravox and NSV