Arrived in South Africa safe and sound as well as all our luggage. The kids were freaking awesome–they’re really cut out to be world travellers. I even survived the 18 hour stretch without a cigarette, without being all cranky and stuff.

Now, we’re at my mother- and father-in-law’s house in Victory Park, Gauteng and for now I’m using their ADSL connection. Here’s the speedtest.net results:

Tomorrow, we head into Cresta Shopping Center so I can pick up a HSPDA/3G card for my MacBook Pro and a few SIM cards for our BlackBerry phones so we can make local calls.

I’m being called downstairs for dinner, but I’ll try to fill in some more details when I get a chance. 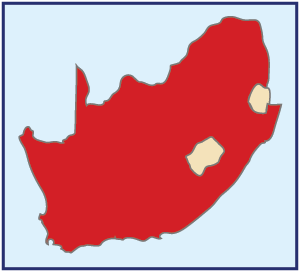 I haven’t blogged about this yet, but tonight, we leave for South Africa for six weeks. We’re taking the kids with us, and they’re going to miss a few weeks of school in exchange for what will hopefully be an invaluable learning experience.

We will be visiting my spouse’s fairly large family all over the place. There will be places to go and people to see. We’ll be there through the holidays, returning in the new year.

I will be online as much as I can be through various connectivity methods–it’ll be interesting to see where and how I can get connected around the country.

If there are any South Africans reading this blog, feel free to share any tips or suggestions you might have. Thanks.

Waiting for the Great Pumpkin of 2008 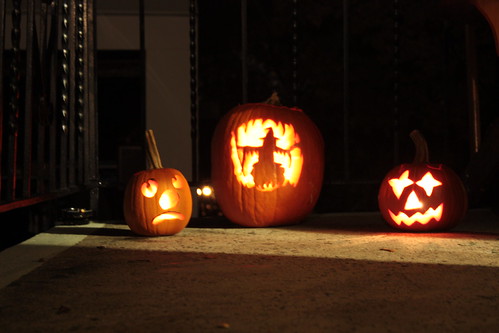 So, we’re all ready for the visit of the Great Pumpkin this year, if it comes!

We recently had photos taken at church for the upcoming printing of the church directory. I think the picture came out really nicely, so I’m posting it here, too. 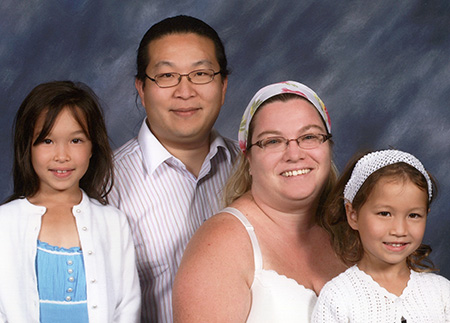 seankreynolds discusses the shift in attitudes regarding corporal punishment of children in his LJ today. I left this comment in response:

Often I think people mistake abusive violence and discipline. Given that we’re all just meat puppets and operant conditioning is well understood, punishment as a form of discipline is necessary; neutering a parent’s ability to physically punish is a grave mistake of our society. However, as you describe, anecdotes of unprovoked violence is abuse. Violence with the intent to cause pain rather than serve as punishment is abuse.

There’s no room in this world for abuse. However, a society that does not apply physical punishment when appropriate is equally doomed.

The fact that we no longer condone appropriate physical punishment, I feel, comes from us collectively “erring on the side of caution” as it is too easy for people to cross the line from punishment to abuse. Unfortunately, it’s the risk aversion to letting parents make such a mistake that has ultimately created worse problems.

I know this is a subject that many feel strongly about, and people’s opinions cover the whole spectrum. Is there something about my comment you disagree with? Am I missing something? Tell me what you think in the comments below.

shiobara.com is getting a make-over

It’s been over two years since we’ve taken the photo album down on the family website, shiobara.com–June 2005, to be exact. It’s time to give it some proper care and feeding. The first step was to replace the old site with WordPress, which required some changes to AOLserver in order to get it to work right. I then created a new theme that’s a little less cluttered and with colors that aren’t quite as offensive. Here’s a “before and after” set of screenshots: 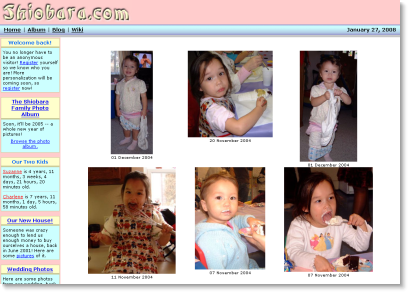 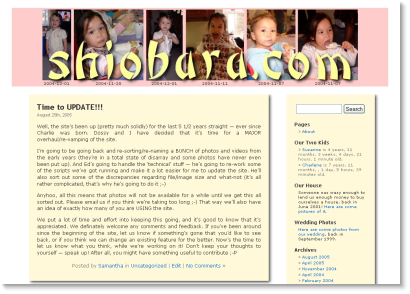 I realize I have no graphic design ability–hell, I can’t even coordinate colors when I dress myself. Someday, I’ll find someone who’s ridiculously talented and wants to do the graphic design for me to save me the embarassment of doing it myself. Until then, I’ll just keep hacking away at it myself.

Now that the site is all in WordPress, the next step is to clean up the photo album. I took it down back in 2005 and wanted to redo it, but never got around to it. So, recently, I’ve started working on a Media Gallery plugin for WordPress that uses jQuery, jCarousel Lite and ThickBox. It’s pretty slick, and once we’ve launched the photo album, I’ll release the plugin as open source. If you’d like a sneak peak to beta test it, just ask.

Filed Under: Family, Geeking out, Open Source Leave a Comment

Tiger and Fudgebar, recent additions to our family

My wife did all the work of finding the cats and adopting them and without all her hard work and effort, nothing would get done around here. She also snapped off a few awesome pictures of the cats after they adjusted to the house a bit.

Here’s two pictures that she took of them that I got around to uploading: 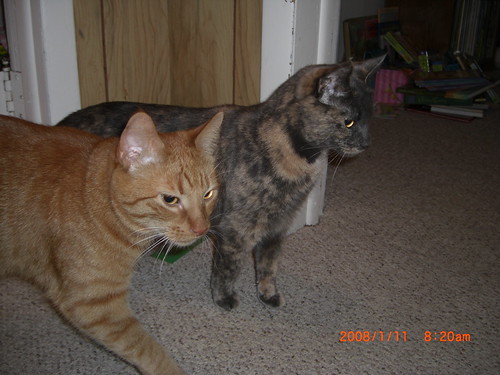 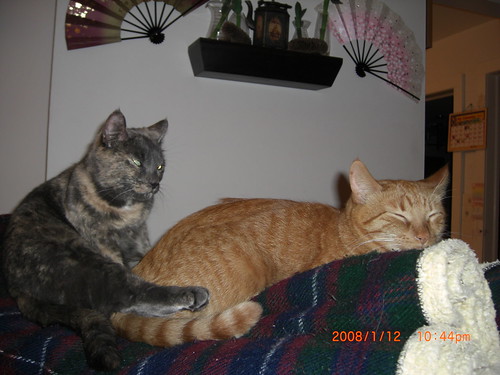 Somehow, Santa managed to score us a Nintendo Wii for Giftmas this year. Hopefully, this will eventually replace our PlayStation 2, once we build up a reasonable collection of games.

I have to admit, the last Nintendo-based gaming product I’ve owned was the Super NES. I passed on the GameBoy family of products, the GameCube, and the DS. But, the Wii … something about it just smelled of old-fashioned Nintendo charm … gameplay that was really fun again, not like these annoying reflex-based twitch games that are so popular today.

The games we’ve tried so far: Super Paper Mario and Wii Play. I was hoping that Super Paper Mario was more like the original Super Mario Bros. game from the NES days, but it’s pace is heavily punctuated by the cute storyline. I don’t know if I’ll be able to get into it.

On the other hand, Wii Play was a hit the moment we started. Both of my girls, ages 7 and 4, study horseback riding, so the “Charge!” game was the natural first choice to try. They quickly figured out the mechanics of how to hold and manipulate their Wii remotes and had a blast! The rest of the Wii Play games were fun, but some were a bit difficult to play given our setup. Let me explain with a picture: 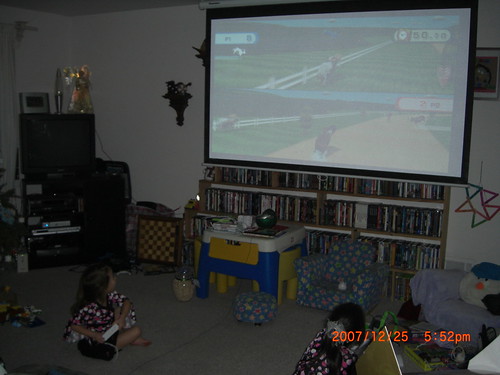 That’s our living room. That’s a 87″x65″ projection screen that they’re playing on. The little sensor bar is sitting on that Little Tykes table, below the screen. The sensor bar is, what, maybe 24″ wide? Perhaps there’s a setting I can adjust more than “above or below the screen” (which I’ve already set to “below”), but pointing at a location on the screen doesn’t work right. Still, playing on the big screen makes for an awesome Wii experience, I have to admit.

I have to say, Nintendo has really done well with the Wii. It’s definitely the kind of gaming console that reminds me of my childhood, growing up with the original NES. I’m glad I can share that experience with my chidlren.

Congratulations, and thanks, Russell

I’m busy working this weekend, but my wife and children are down in Delaware in support of my brother-in-law, Russell. Tomorrow, he will be stepping down from his position as Wing Commander of the Delware Wing of the Civil Air Patrol (CAP).

Over the years, he has volunteered an enormous amount of time and effort to the organization. He has received a number of awards–most recently the Daily Point of Light No. 3547 from the Points of Light Foundation, which goes into greater detail about Russell’s accomplishments.

It takes a very special person to give so much of himself as Russell has. The CAP is a valuable organization and has benefitted greatly from his contributions. Through his generosity, all our lives have been affected for the better.

Even though I can’t be there tomorrow for your Wing Change of Command ceremony, congratulations and thanks for everything you’ve done and continue to do.

Tonight, driving home from dinner, the subject of Mother Nature came up. Charlie, my 7-year-old daughter, asked, “What about houses?” We explained that houses are man-made, to which my daughter explained without hesitation, “Oh, that must be Father Nature, then”–which logically follows since fathers are men.

I am constantly reminded of how I want to be as smart as she is when I grow up.

Okay, after being fed up with my Dell Latitude C840's … END_OF_DOCUMENT_TOKEN_TO_BE_REPLACED

So, today on ABC News, they're running an article entitled … END_OF_DOCUMENT_TOKEN_TO_BE_REPLACED

“Monsters are real. But the real ones are not bulletproof.”

I haven't been actively reading my feeds, so when I fired up … END_OF_DOCUMENT_TOKEN_TO_BE_REPLACED

hanging on by a thread